Some textile contexts for portraits of Charles I and Henrietta Maria

Luxurious fabrics are one of the most striking features of portraits of Charles I and Henrietta Maria, and especially the glowing, flowing silks. But what might those silks have meant to people in the early seventeenth century? What did ‘silk’ evoke for them, in terms of money, status – and, perhaps, literary associations?

‘Silk’ is an umbrella term for many different kinds of textile, some of which are still familiar, some not. In the seventeenth century, ‘velvet’ means silk velvet; ‘satin’ is silk (it refers to the weave, not the fibre); so are damask (named, ultimately, for Damascus, in Syria) and brocade, and taffeta, gauze, tabby, camlet, lustring, sarcenet, tiffany, tissue, let alone blends such as bombazine, grogram, say (silk and wool) or cypress (silk and linen), and many more: the names of textiles are mobile and approximate in time and space, and the more so the more historically distant they become. They are also wonderfully evocative, like the ‘changeable taffeta’ of which Shakespeare’s Feste, in Twelfth Night, suggests that the melancholic Orsino should have a doublet, much more exotic than the modern equivalent, ‘shot silk’. Charles I saw the play and found it memorable: his copy of the ‘Second Folio’ of Shakespeare’s plays has ‘Malvolio’ written next to the play’s title, in the king’s own hand-writing, referring to the steward who dreams of marrying his mistress and wearing a ‘velvet gown’ but is instead deceived into making a fool of himself by wearing inappropriate yellow stockings.

The seventeenth century was not simply an age without synthetics: its first half also largely predated the universality of cotton, although there were many cotton-blend fabrics available. Most people in early modern England wore linen and wool, and leather, in a variety of weaves and blends, and often of great fineness, expense, and beauty. Silk, however, remained a luxury, a marker of elite status, great wealth, or both. An ensemble entirely of silk would have been beyond the reach of most; a silk scarf or ribbon, however, in a rainbow of colours, would have been affordable by all but the very poorest, and were sold by itinerant peddlers (like Shakespeare’s Autolycus, in The Winter’s Tale) as well as by mercers, drapers, and milliners.

To wear silk was one of the defining qualities of being a courtier in early modern England, and especially in the seventeenth century. Such garments were a massive, risky investment, a means of drawing attention to oneself, not simply through novelty and style, but above all as someone who could afford such things. The poverty of tailors in the period is proverbial, because courtiers were so slow to pay their bills: in Shakespeare’s Cymbeline, the exiled Belarius contentedly compares his life in the wilds of Milford Haven with those at court, who ‘rustle in unpaid-for silk’.

In Ben Jonson’s Every man out of his humour, first performed in 1599, the impressionable student Fungoso is so obsessed with the ever-changing garments of his idol, Fastidious Brisk, that he stalks him around town, accompanied by his tailor, in order to commission exact copies. He is so taken with Brisk’s new ‘blush-coloured satin’ outfit, and so desperate for one like it, that he tells his tailor to reuse the linings from the suit that he is currently wearing, which means that he will have to stay in bed reading until the new outfit is done, as he has nothing else to wear except a now-despised ‘old suit’. When, proudly wearing his own new satin suit in imitation of his idol, he encounters Brisk wearing yet more new clothes, he falls to the ground in a swoon, exclaiming ‘Another suit!’

Charles I’s father, James VI and I, had attempted to foster an English silk industry: silkworms were imported, mulberry trees (not native to England) were planted in huge numbers, by royal proclamation; there was a four-acre ‘Mulberry Garden’ where Buckingham Palace now stands, and Inigo Jones designed a house for Queen Anna’s silkworms at Oatlands Palace (near Weybridge, in Surrey) in 1616. For a time, the king took silkworms with him wherever he went, with one of his Grooms of the Chamber responsible for their care. Although the king’s efforts were largely unsuccessful even in the short-term, silkworms were also sent to the new colonies in Virginia, and silk cultivation was vigorously promoted there. Small quantities of silk had been woven in England for centuries, but the raw silk was imported – from Piedmont, China, Turkey and, by the early seventeenth-century, from Iran, directly or via France and Italy – and almost all of what was manufactured in England around 1600 were ‘narrow-wares’, ribbons and braids, often made by women working at home or in small workshops.

Silk fabrics were mostly imported from Italy and France, and it was not until after the Restoration that the silk-weaving industry in England was able to compete in the export market with Italy and France, although it was growing from the sixteenth century onwards. Raw, or unprocessed silk had accounted for 1.1% of imports at the earlier date, but by 1622, it was 7.5%; in the same year, silk fabrics and thread made up 5.1% of imports to London (in 1559, only 3.3%), and by value, rather than volume, silk accounted for between 23-29% of the total value of all London imports. In 1630 Charles I issued a proclamation to regulate silk manufacture, noting ‘that the trade of silk within this realm, by the importation thereof raw from foreign parts, and throwing, dyeing, and working the same into manufactures here at home is much increased within a few years past’.

The sheer volume of silk, often in just a single colour, in many portraits by Van Dyck and his contemporaries is what has the initial impact; the effect is very different to the busy dasmasks and brocades, the embroidered and jewelled textures of portraits of Elizabeth I, for instance, even if those are as stuffed with silks, or even more so. In both the Mytens and the Van Dyck, however, the silk is subtly textured, not with embroidery, but by being pinked. Slashing garments is familiar, almost a cliché of early modern dress, seen in Holbein’s portraits of Henry VIII (the portrait linked here is based on Holbein’s, and was in the Royal Collection during the reign of Charles I) and many Elizabethan portraits too, whereby an outer garment has decorative slits through which an undergarment, or perhaps a contrasting lining, are pulled; or it might be ‘dagged’, elaborately cut along the edges. Pinking is more subtle: the fabric is cut in patterns with a knife, or punched in designs of little holes with an awl, as a pair of leather brogues might be decorated today. Sometimes it could be stamped with hot metal tools, again, like leather. Such techniques created patterns, and in particular they complicated the ways in which these high-sheen fabrics reflected light, effects that were particularly subtle in candlelight. (It is always worth thinking about what an early modern garment would look like by candlelight, which is warm and, potentially, dim, and flickers too.) But pinking was also a form of conspicuous consumption, because it drastically limited ways in which the fabric could be reused. Elizabeth I’s surviving wardrobe records, for example, show extensive remodelling and remaking, as do the ‘Revels’ accounts, which recorded the expenditure on court masques and entertainments. The term usually used in the records and accounts is ‘translation’; we might say, recycling or repurposing, with fabric pieces becoming smaller and smaller until they were worn out. Many early modern garments, particularly women’s skirts, but also gowns (worn by both sexes) and men’s breeches, were cut very simply: they were shaped with pleats rather than darts or curved seams. Their construction facilitated their recycling. But pinking fabric put it beyond most reuse, even as linings; it weakened the fabric. The astonishing pinking which decorates this woman’s bodice, from the 1630s, probably explains its survival.

It is not simply the volume of silk, however, and its display of the sitters’ wealth that is so striking, but the ways in which silk allows the painter to display his skills. Because of the way in which it takes the light, and its lighter weight, silk suggests movement. For all their formality, Charles I and Henrietta Maria are wearing their clothes rather than being worn by them, as can often seem the case in portraits of Elizabeth I, for example. A heavy brocade curtain or a velvet table-cloth may be draped in formal folds by way of contrast, but the sitter’s garments will be recomposed the moment they relax, or take a step, or adjust their posture. The more unstructured ways in which silk drapes can bring a temporal dimension into a static image, because movement happens in time: it is about to look slightly different, to fold and curve in a different way. (This quality is particularly apparent in some of Van Dyck’s slightly later portraits, such as that of Rachel de Ruvigny, countess of Southampton, 1638, where the silk drapery is painted as if caught by a puff of wind.) Such imagined movement makes the image more sensually appealing, because what is also imagined is the movement of fabric over skin. This is what the Cavalier poet Robert Herrick evokes, in one of his most sensual poems, ‘Upon Julia’s Clothes’:

When as in silks my Julia goes,
Then, then (me thinks) how sweetly flowes
That liquefaction of her clothes.

The rendering of textiles, their contours and folds, the way in which they drape or crease or pucker or dimple or ‘take’ the light, and their suggestion (or not) of a body beneath are some of the measures of the skill of a painter, and a source of pleasure as much as of admiration for the viewer. Portraits from the court of Charles I, such as those by Van Dyck and Mytens, sometimes seem to be more interested in silk than in their sitters, their textiles a form of opulence at once displaying the skill of the artist and the wealth of the sitter. And there is an intriguing paradox here, especially for the visitor to a modern gallery or, even more, an online viewer: the sensuality and tactility of silks, brocades, satins, and velvets, fine linens and leathers, furs and jewels – and skin – can been seen and imagined, but they can never be felt or touched. So vividly present in the two-dimensional surface of the paint, the silks, and the rest, remain as intangible as red or sky or shadow.

Dr Hester Lees-Jeffries is a Senior Lecturer in the Faculty of English and a Fellow of St Catharine’s College, Cambridge. She works on Renaissance literature, especially Shakespeare, and has a particular interest in the relationships between literature and visual and material culture. She is the author of Shakespeare and Memory (2013) and England’s Helicon: Fountains in Early Modern Literature and Culture (2007), as well as many essays and articles. Her new book, Textile Shakespeare, will be published by Oxford University Press in 2021. @starcrossed2018 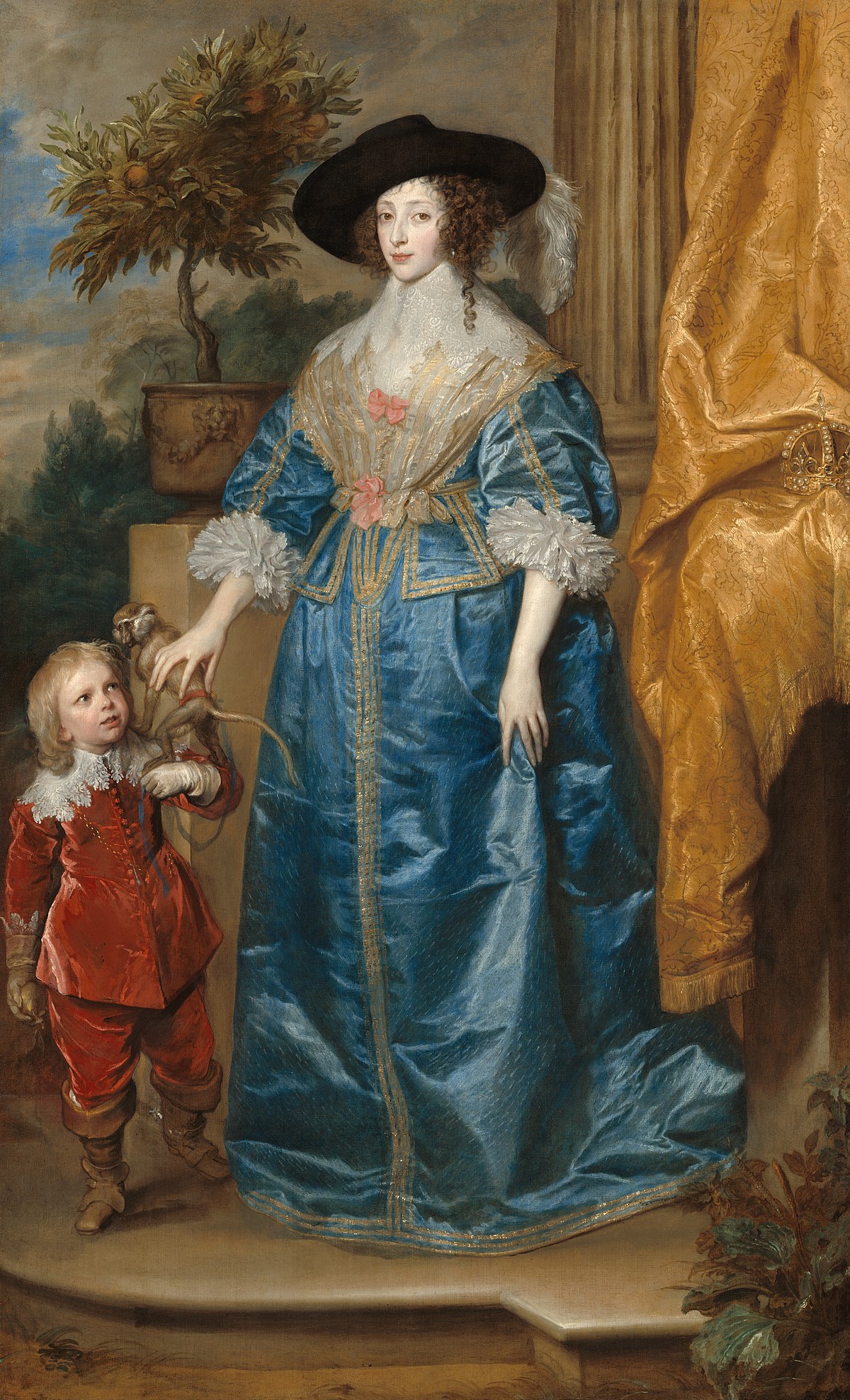 Title: Portrait of King Charles I
Production: 1633
Acquisition: On loan from the Trustees of the Rt. Hon. Olive, Countess Fitzwilliam's Chattels Settlement, by permission of Lady Juliet Tadgell
Maker: Daniel Mytens I
Technique: Oil on canvas 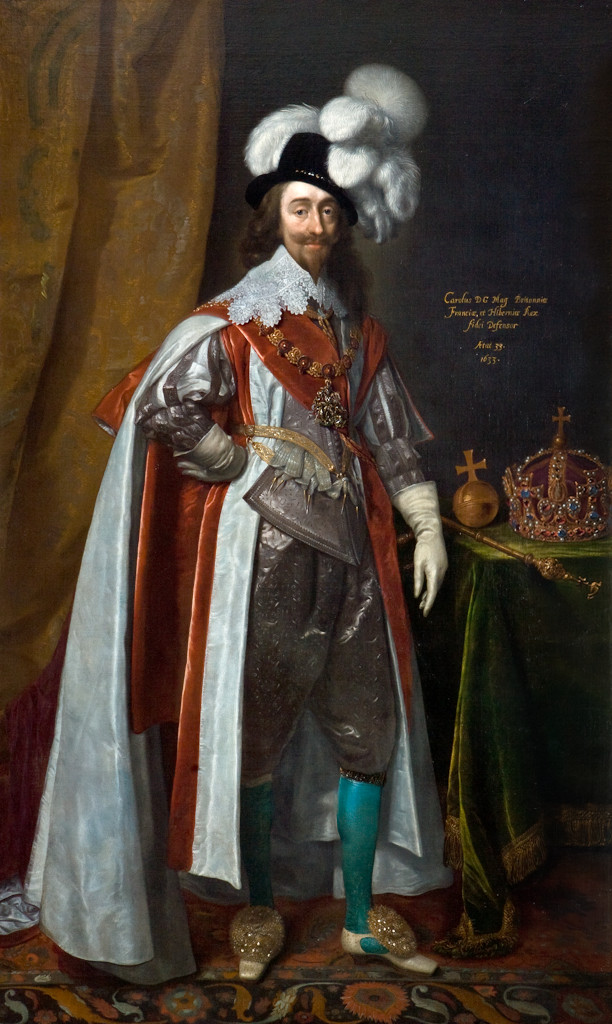