Pamela and Mr B. in the summer house

Between February 1744 and April 1745 Joseph Highmore placed a regular series of advertisements in London newspapers to announce the impending publication of ‘twelve prints by the best French engravers, after his own paintings, representing the most remarkable Adventures of Pamela’. He invited customers to visit his house in Lincoln’s Inn Fields to view the paintings after which the prints would be engraved, and subscribe to the set for the price of two guineas, a saving of six shillings after the subscription closed on 1 May. The engravers Highmore employed were Laurent Truchy and Antoine Benoist, whose birth and death dates are uncertain but who came from France to work in London. The plates they produced were large in size (298 x 375 mm), comparable to Hogarth’s Progresses of the mid 1730s, and Highmore employed a similar narrative sequence, although these of course faithfully followed Samuel Richardson’s novel (1740) and its sequel, Pamela in her Exalted Condition (1742), rather than his own invention. Highmore did add his own lengthy and interpretive captions to the prints, in English and French, to appeal to a wide market, which fill the reader in on what is going on in the scene, and what has happened to lead to this moment.

The Fitzwilliam Museum’s prints and drawings can be viewed by appointment in The Graham Robertson Study Room. The room is open Tuesday to Friday, 10.00 – 16.30 (closed 13.00-14.00). Please email fitzmuseum-studyroom@lists.cam.ac.uk. 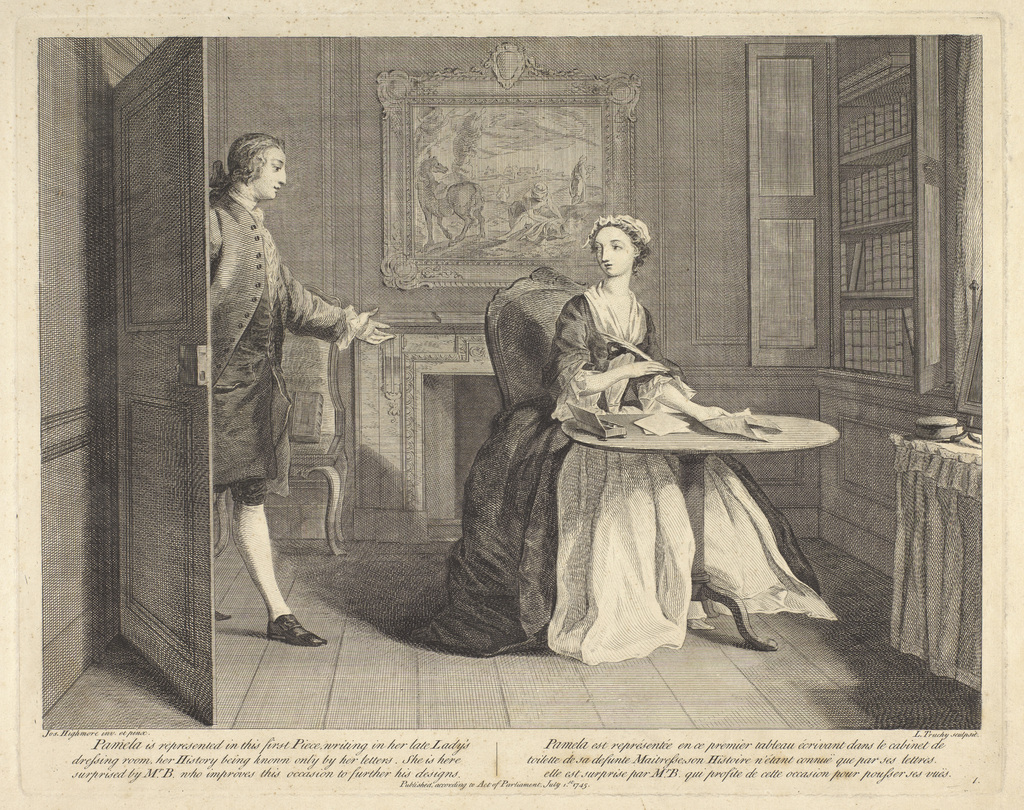 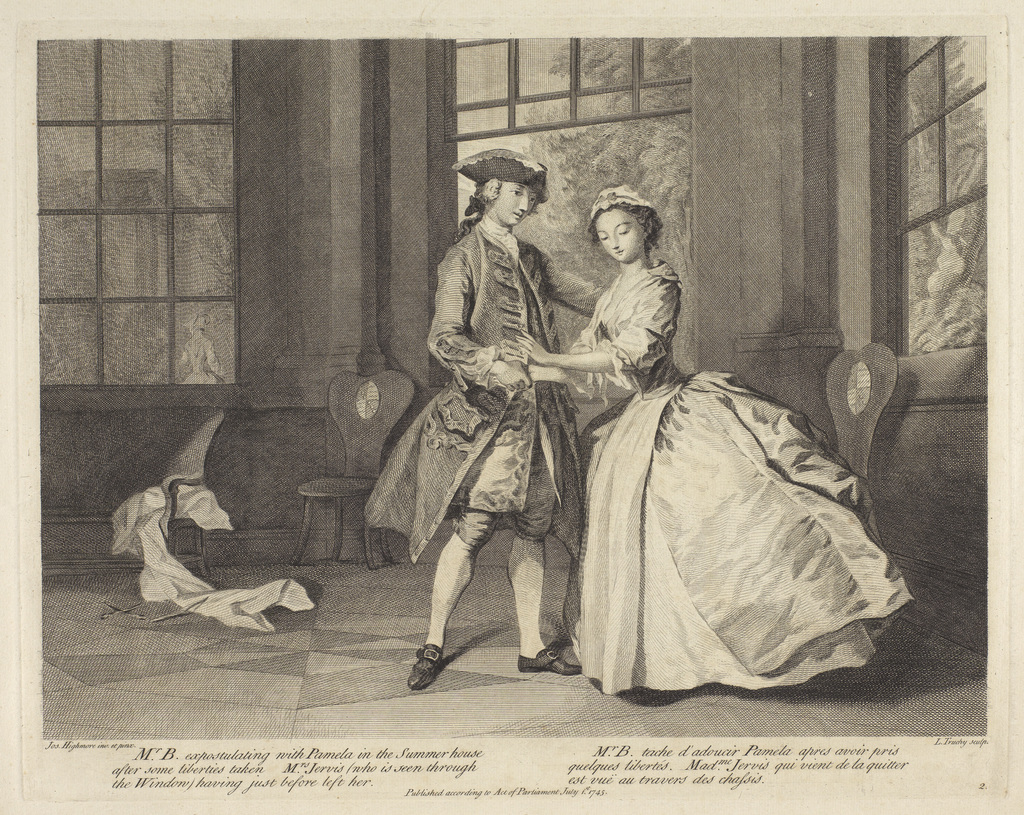 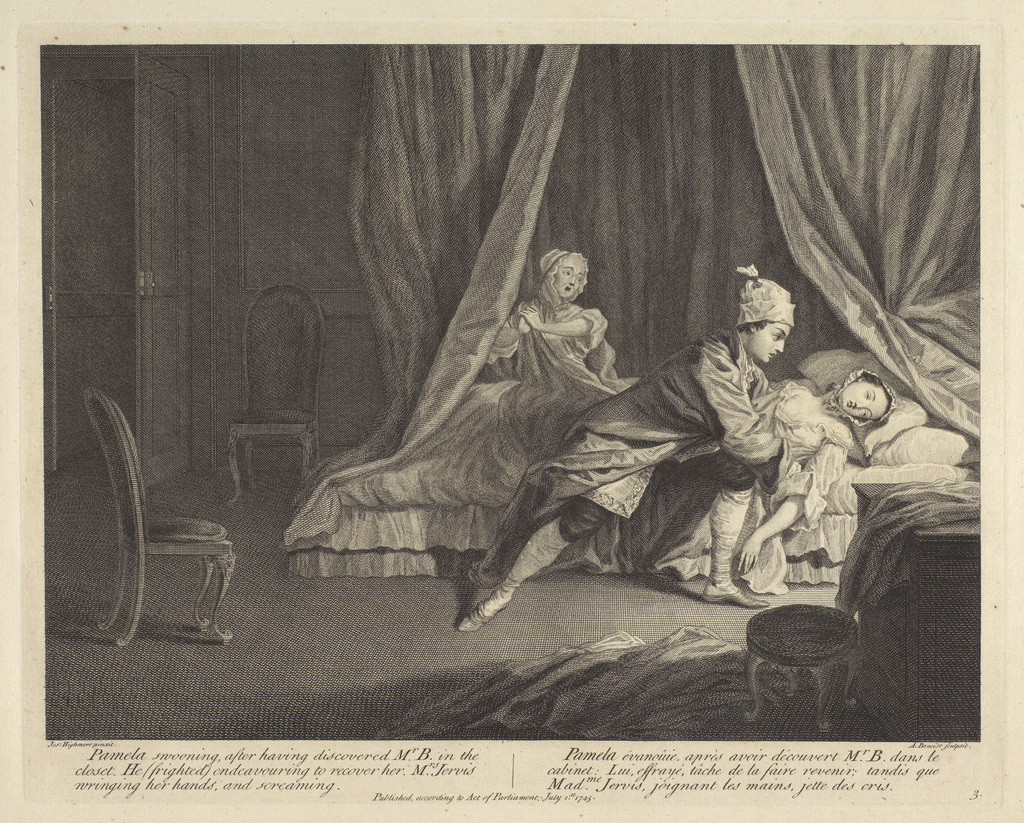 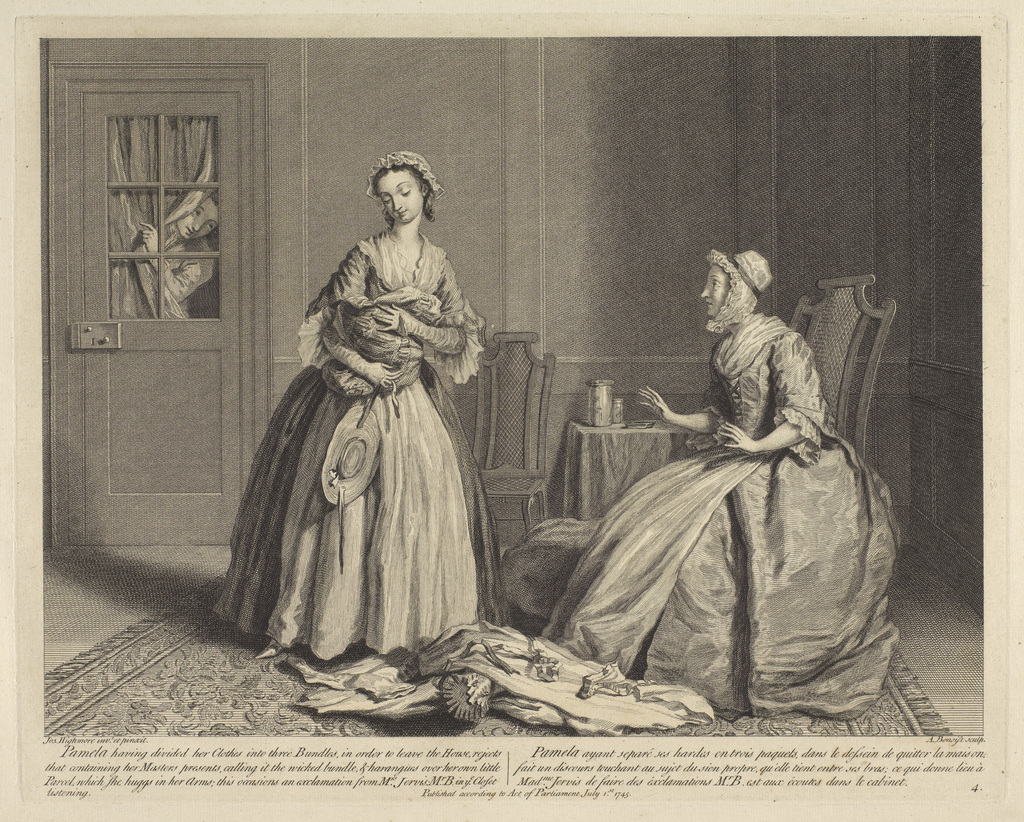 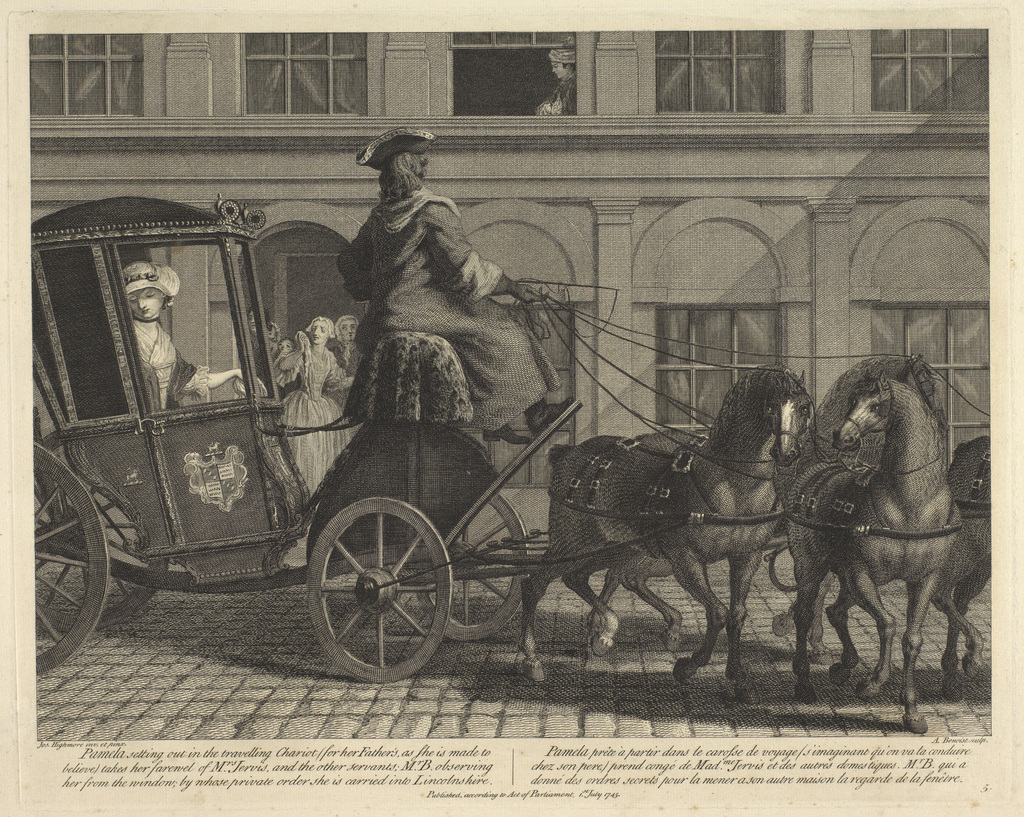 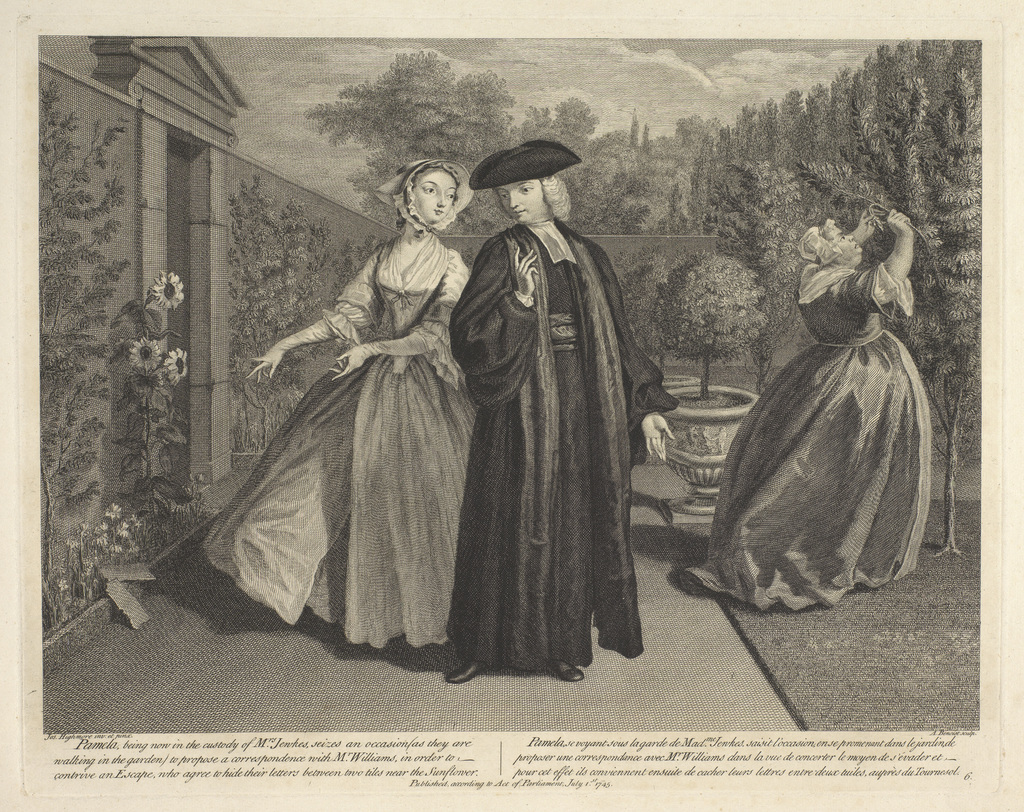 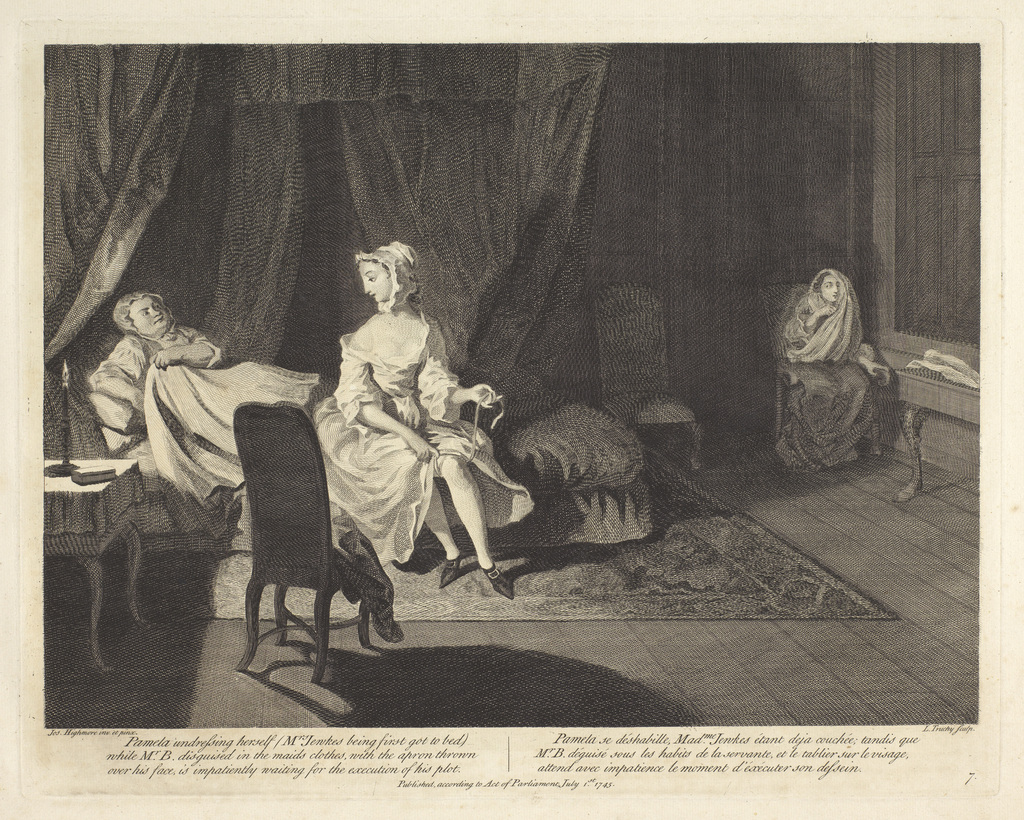 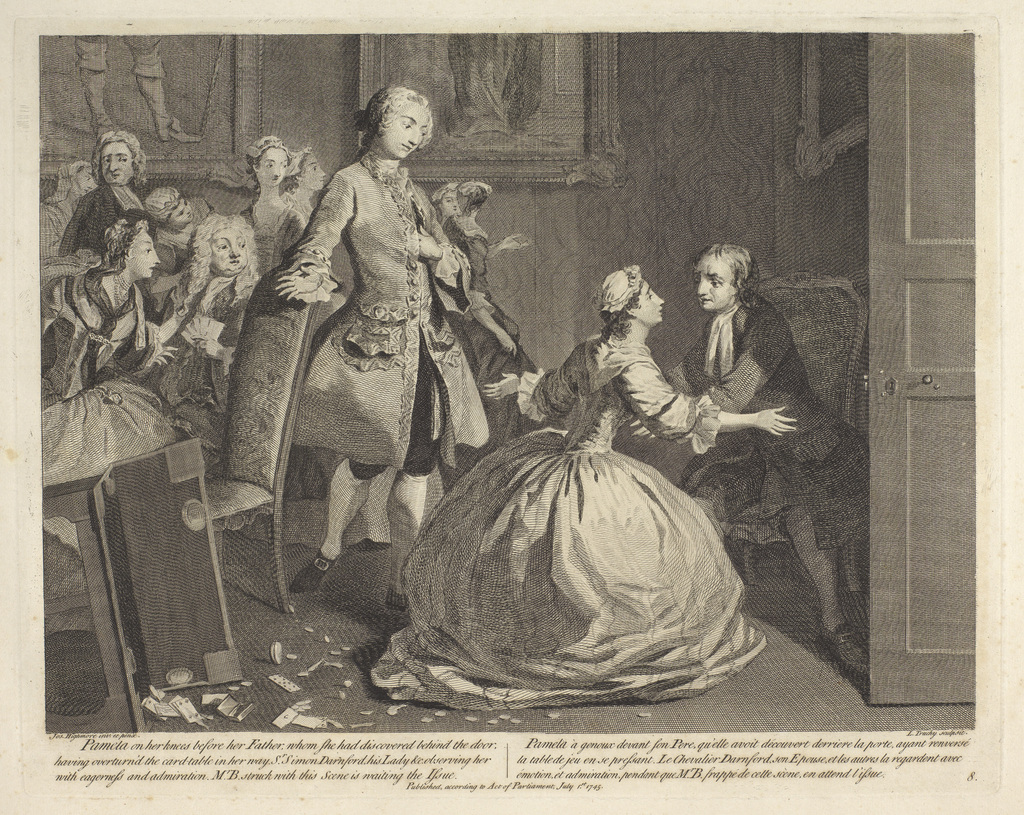 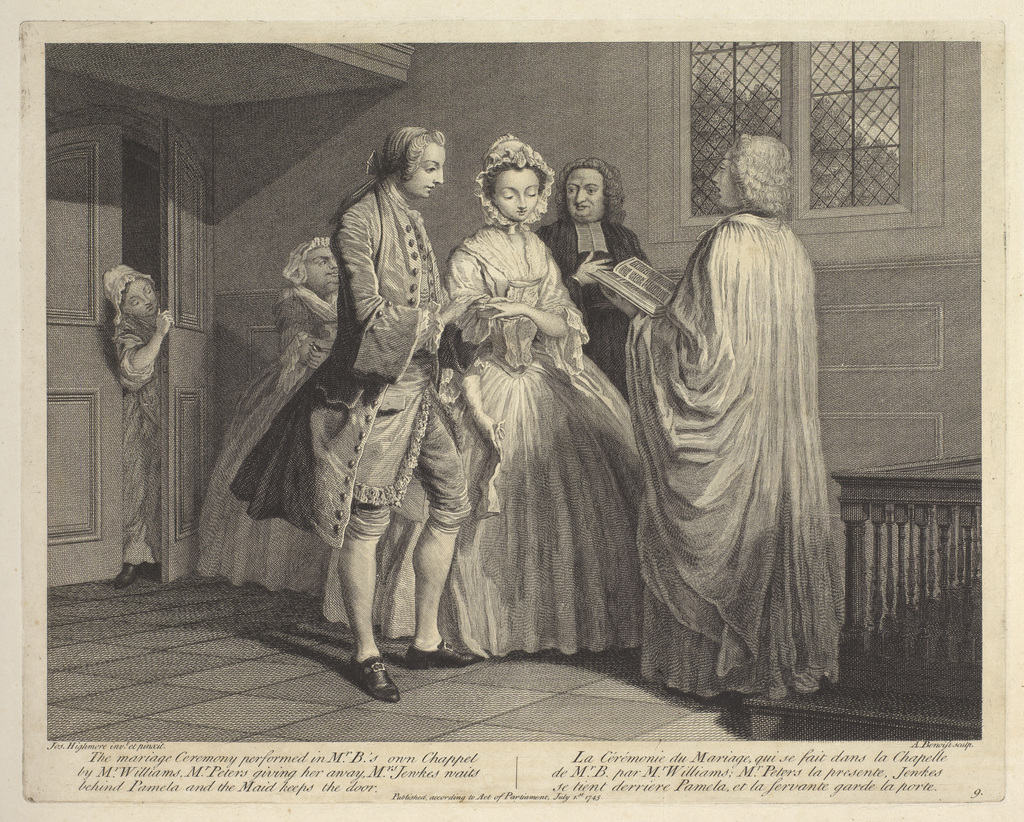 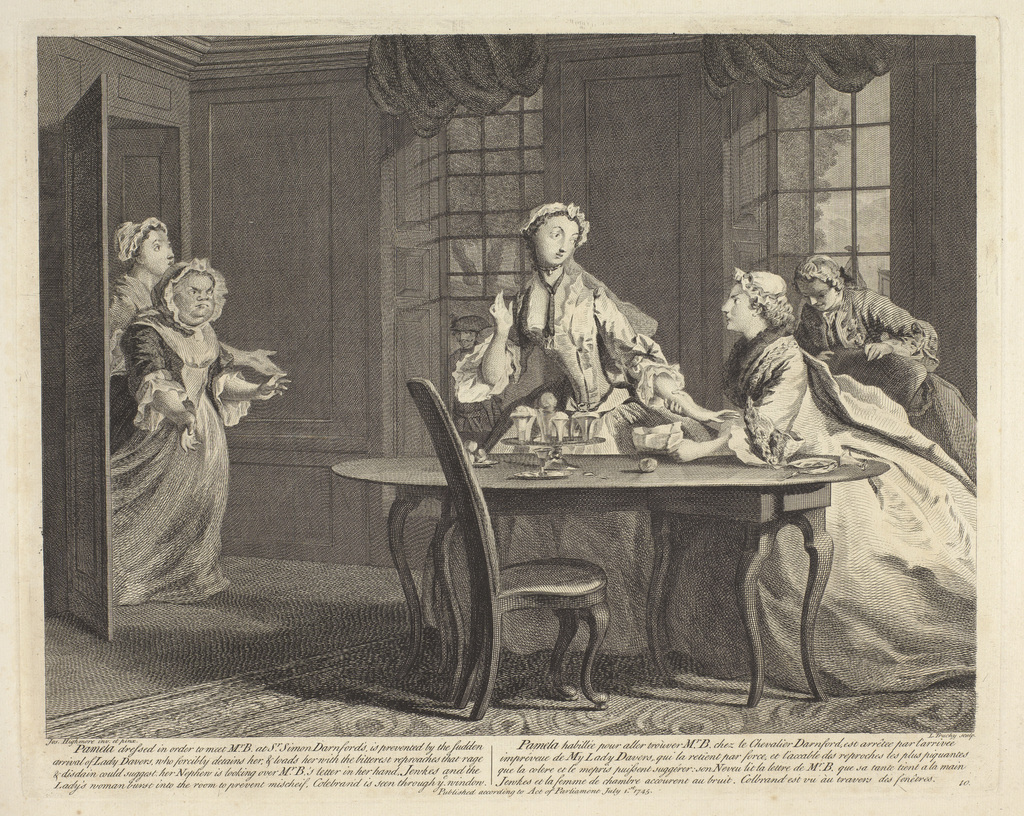 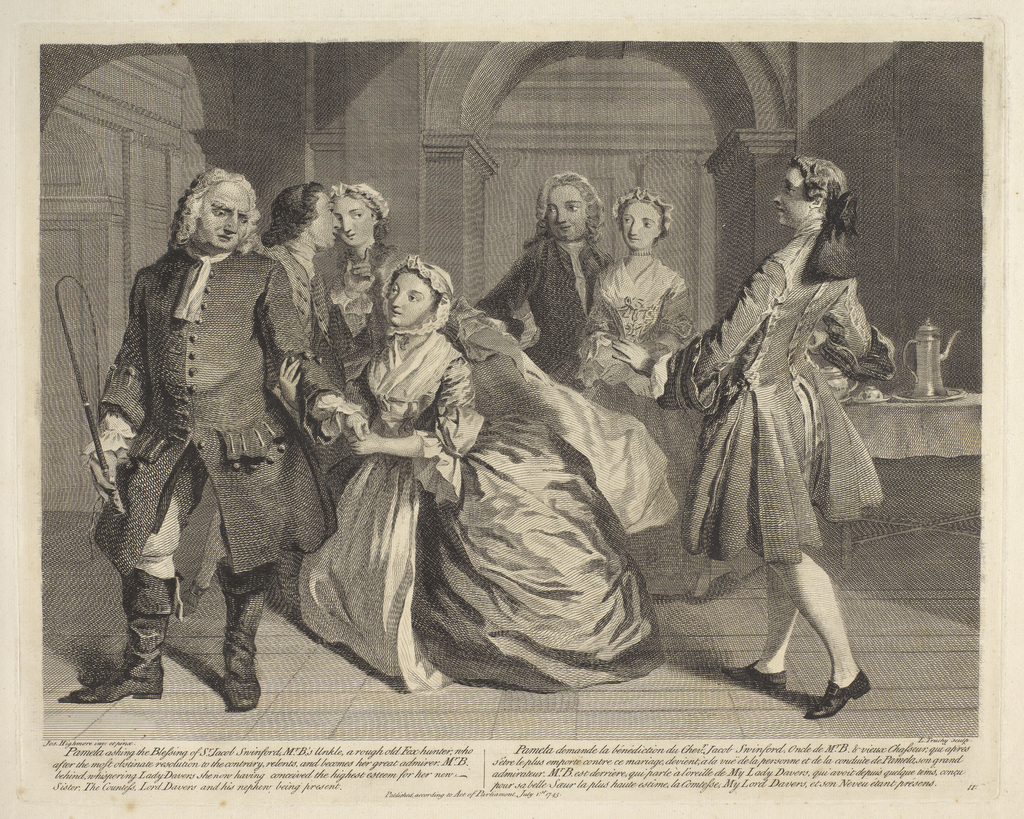 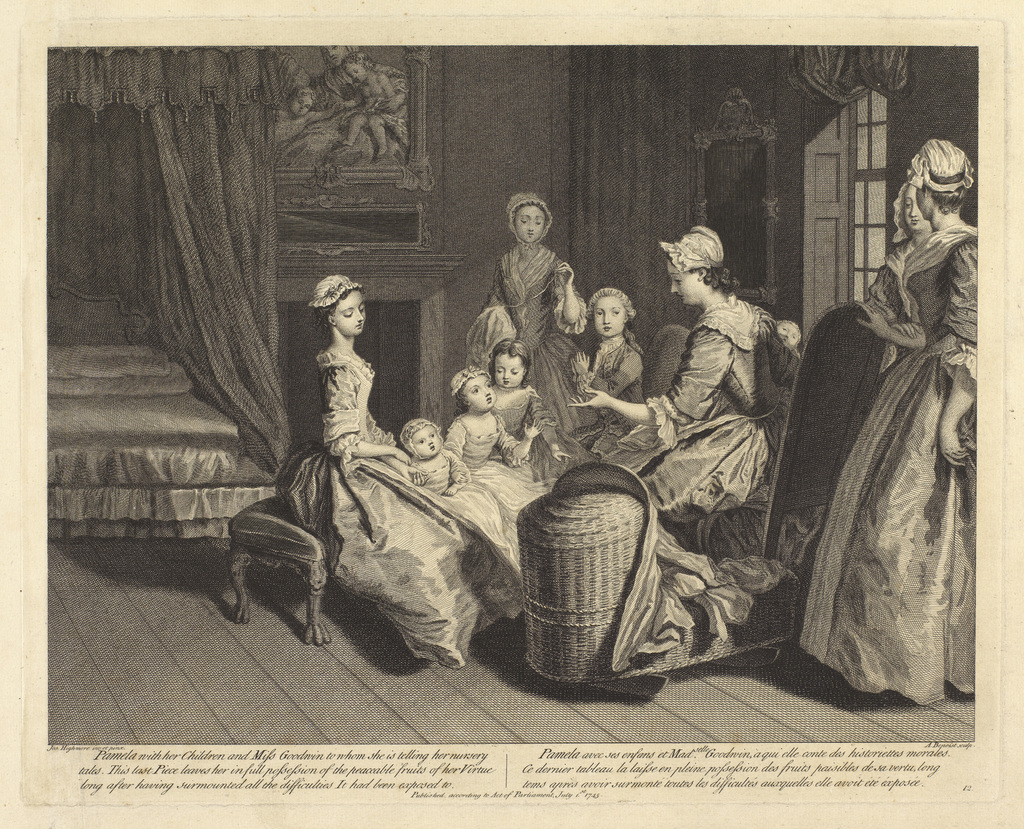 Plate 1: Pamela is represented in this first Piece, writing in her late Lady’s dressing room, her History being known only by her letters. She is here surprised by Mr. B. who improves this occasion to further his designs.

Plate 2: Mr. B. Expostulating with Pamela in the Summer house after some liberties taken Mrs. Jervis (who is seen through the window) having just before left her.

Plate 3: Pamela swooning in her bed after having discovered Mr B in the closet. He (frighted) endeavouring to recover her. Mrs Jervis wringing her hands, and screaming.

Plate 4: Pamela having divided her clothes into three bundles, in order to leave the house, rejects that containing her Masters presents, calling it the wicked bundle and harangues over her own little parcel, which she huggs in her arms; this occasions an exclamation from Mrs. Jervis: Mr. B. in the closet listening.

Plate 5: Pamela setting out in the travelling chariot (for her fathers, as she is made to believe), takes her farewell of Mrs. Jervis and the other servants: Mr. B. observing her from the window, by whose private order she is carried into Lincolnshire.

Plate 6: Pamela being now in the custody of Mrs. Jewkes, seizes an occasion (as they walking in the garden) to propose a correspondence with Mr. Williams, in order to contrive an escape, who agree to hide their letters between two tiles near the sun-flower.

Plate 7: Pamela undressing herself (Mrs. Jewkes being first got to bed) while Mr. B. disguised in the maid’s clothes with the apron thrown over his face, is impatiently waiting for the execution of his plot.

Plate 8. Pamela on her knees before her father; whom she had discovered behind the door, having overturn’d the card table in her way, Sr. Simon Darnford, his Lady, &c observing her with eagerness and admiration. Mr. B. struck with this scene is waiting the issue.

Plate 9. The marriage Ceremony performed in Mr. B’s own Chappel by Mr. Williams, Mr. Peters giving her away, Mrs. Jewkes waits behind Pamela & the Maid keeps the door.

Plate 10. Pamela dressed in order to Mr. B. at Sr. Simon Darford’s, is prevented by the sudden arrival of Lady Davers, who forcibly detains her, & loads her with bitterest reproaches that rage & disdain could suggest, her Nephew is looking over Mr. B.’s letter in her hand, Jewkes and the Lady’s woman burst into the room to prevent mischief, Colebrand is seen through the window.

Plate 11. Pamela asking the blessing of Sir Jacob Swinford, Mr. B’s Unkle, a rough old Fox-hunter who after the most obstinate resolution to the contrary relents and becomes her great admirer; Mr. B. behind, whispering Lady Davers she now having conceived the highest esteem for her new Sister. The Countess, Ld. Davers, & his nephew being present.

Plate 12. Pamela with her children and Miss Goodwin to whom she is telling her nursery tales. This last piece leaves her in full possession of the peaceable fruits of her virtue, long after having surmounted all the difficulties it had been exposed to. 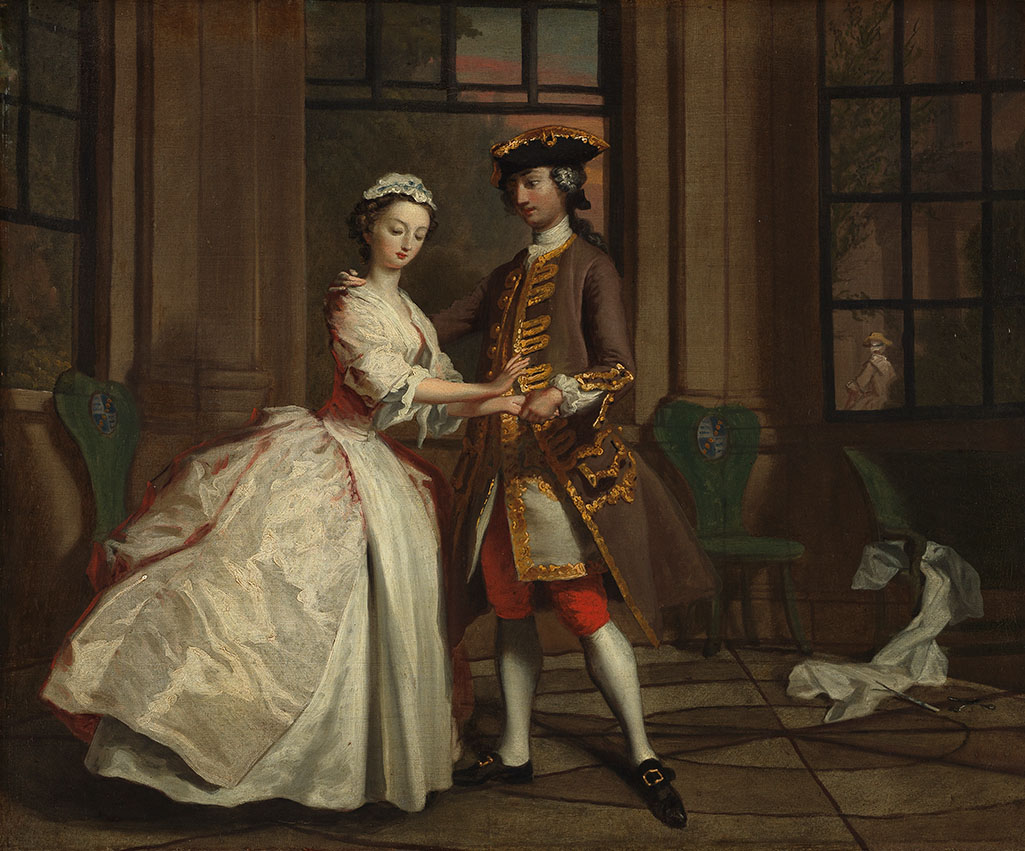